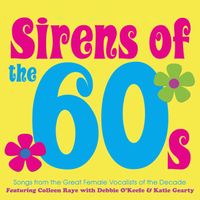 SIRENS OF THE 60S

GIRL SINGERS OF THE HIT PARADE: SIRENS OF THE 60s” AT THE STATE THEATRE ZUMBROTA

Colleen Raye, Debbie O’Keefe, and Katie Gearty will perform “Sirens of the 60s,” featuring classic tunes of the 1960s by the female artists of the era, on Saturday, June 18 at 2 p.m. and 7:30 p.m. at The Phipps Center for the Arts in Hudson, Wisconsin.

The show celebrates the vocal prowess of singers such as Carole King (“The Loco-Motion”), Dionne Warwick (“Walk on By”), Cass Elliot of the Mamas and the Papas (“Monday, Monday”), Lesley Gore (“It’s My Party”), Petula Clark (“Downtown”), Jackie DeShannon (“Put a Little Love in Your Heart”), Shirley Bassey (“Goldfinger”), Tammy Wynette (“Stand by Your Man”), Nancy Sinatra (“These Boots Are Made for Walkin’”), Gale Garnett (We’ll Sing in the Sunshine”), Dusty Spingfield (“You Don’t Have to Say You Love Me”), and Brenda Lee (“I’m Sorry”).

Raye has been performing and creating shows since the ‘70s, touring across the U.S. Currently, she has three successful musical revues, “A Musical Tribute to Patsy Cline,” “The Girl Singers of the Hit Parade,” and “The Girl Singers of the Hit Parade Christmas Show.” And her new show “An Evening at the Cabaret.” Raye has a warmth and charisma that is apparent the moment she walks onstage. The Las Vegas Review Journal said, “She shines . . . a delightful and obviously well-trained voice.” Variety commented on her “powerful alto voice” and “distinctive style.”

O’Keefe, also a “Girl Singer” and Raye’s sister, performs with the Minnesota Jazz Orchestra, Century jazz ensemble, Tim Patrick and the Blue Eyes Band as their female vocalist as well as with All of Colleen Raye’s Productions . Gearty performs in the Minneapolis music scene singing in venues such as The Dakota and Hell’s Kitchen or lending her voice to other Twin Cities musicians.